One of the perks of 3D printing is being able to create things cheaply. 3D printing and prosthetics are a natural fit, and one man says he prefers his new 3D printed hand to the pricy prosthetics.

Jose Delgado Jr. was born without most of his left hand, and he’s seen his fair share of prosthetics over the years. One of his most recent prosthetic hand is valued at around $42,000 and uses muscle signals from his forearm to control finger movements within the hand.

Jose decided to give something new a try, and that something is a 3D printed hand known as “Cyborg Beast.” The Beast comes from the mind of Jeremy Simon, an e-NABLE volunteer and founder of the site 3D Universe. Simon wanted to try and make Jose a hand that would be more practical than the high-priced models and more importantly, more useful in day-to-day tasks. 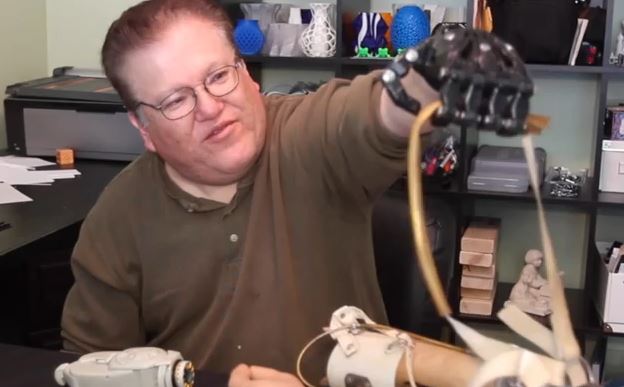 Simon found the design for the hand at e-NABLE and was able to print it up using around $50 worth of material, and Delgado says that it’s made life much easier. It doesn’t look as real as his previous prosthetic, but it makes tasks like carrying bags and driving more manageable along with work-related activities like moving boxes. It’s also a whole lot cheaper to repair a 3D-printed hand than a $40,000 prosthetic.

The new hand was based in part from the Robohand design, and is just the first as Simon plans on printing Delgado another hand with a new thumb using a stronger material called Bridge Nylon. The video below shows Delgado talking to Simon about his new hand, and if you’re interested in learning more about the project you can head on over to 3D Universe.