Don’t get left behind in the race to buy a 3D printer! It is now one of the top products being budgeted for by universities.  Students seeking jobs in a selection of occupations are being asked if they know and understand how to use 3D printers. If your faculty hasn’t made the decision yet, your future students may miss out when they apply for their first jobs.

3D printing has become important in the technology landscape, so much so that anyone in the educational field, such as researchers in many different disciplines, are buying 3D printers so they don’t get left behind in the development of new products.

An impressive list of universities globally have started investing significant amounts of money in 3D printers. The list includes Harvard, Cornell, and universities in every state and around the world. Global spending on printers shows the industry importance as it is predicted to reach $27B by 2019.

Many educational institutions, are buying 3D printers, in particular for engineering, science and visual arts courses. In fact, more than 200 colleges and universities currently offer 3D printer coursework programs. These courses offer students the necessary skills needed for the creation of 3D computer models.  They begin the course learning basic computer modelling techniques, and then progresses to the students developing their own prototypes. It is particularly important in education, where research students can translate their designs into physical objects. 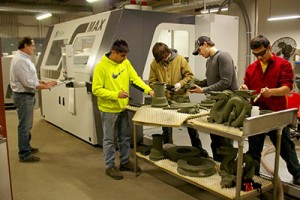 Universities Use 3D Printers for Research

Universities such as Cornell University have been quick to use 3D printers and last year demonstrated the 3D printing of an artificial replacement ear, while North Carolina’s Wake University earlier this year has been experimenting with materials made from plastic-like substances along with living cells derived from rats, rabbits, mice and humans. Through the use of a bio-printer, which is capable of 3D printing human tissue, bone, muscle and ear structures have been created.  The great thing about this experimentation is the fact that living cells have finally survived the 3D printing process.

Outside of the U.S., researchers at Scotland’s Heriot-Watt University have developed a method of printing human embryonic stem cells as blobs.

Industries Require Employees to Know How to Use 3D Printers

Employers are demanding that applicants know how to use a 3D printer. Wanted Analytics, a data company, discovered that more than 35% of job vacancies in the engineering industry made it a condition that prospective employees be familiar with 3D printers and their capabilities in the additive manufacturing process. Surveys indicate that more than 30 percent of the top 300 largest global brands are using or evaluating 3D printing for prototyping, innovation projects or for production. So far, 71.1% of manufacturers have currently adopted 3D Printing.

3D Printers Bridge the Gap Between Universities and Industries

Universities, which have purchased 3D printers are building bridges between themselves and employers. The University of Alabama, Huntsville, has bought a sophisticated 3D printing machine leading both public and private organizations to approach the university requesting University help to produce prototypes. They are working with several different organizations, including the U.S. Army and NASA.

3D Printers Give Students an Advantage

3D printers are soon poised to revolutionize manufacturing just as PCs in the 1990s revolutionized the media. As this technology expands, students who learning to experiment with it will gain a distinct advantage both as experts and entrepreneurs in all the areas of product design and manufacturing in the future.

The world is on the move when it comes to 3D printers.  Join the global trend and give your students an advantage!

Get Product and Sales Updates