On November 20th, a small step was taken by an organization known for it’s giant leaps. NASA, working in conjunction with Made in Space, deployed it’s first 3D printer in space. This technology is interesting because of the special constraints a zero-g, enclosed environment poses for earthbound printers. Gravity has been an essential force in the process. When it’s not there, z-axis movement encounters a range of problems. This is just the beginning, though…3D printed spaceship parts are being used by Space X, Elon Musk’s extraterrestrial brainchild, and we’ve mentioned before the possibility of printed buildings on the Moon and Mars. Printing in space is becoming very exciting.

Since 2011, both NASA and Made in Space have been working together to design a printer that could work for testing on the International Space Station (ISS). This has been a Phase III Sole Source contract for the Singularity University startup. Although even the gravity issues seem relatively straightforward to solve, in orbit nothing is easy. 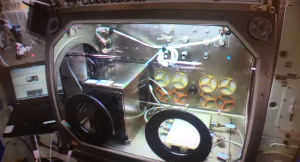 Made in Space 3D printer

Made in Space divided the problem into two rough categories: issues with zero-g, and issues with the recirculated environment. The lack of gravity means that gears, belts, and other typical mechanical givens don’t behave quite the same way as on Earth. With the ideal level of precision they’re hoping for, this can cause significant issues. Just consider if gear backlash didn’t work quite the same way with your printer at home…that little shift can be the difference between a print that works and scrap.

Additionally, there’s the issue with off-gassing. They’re printing with ABS, and all the normal concerns with fumes from ABS apply, except now consider that all air is recirculated. Instead of just using proper ventilation, the air needs to be scrubbed for the toxins before it can be reintroduced to the rest of the space station. To do this they developed what amounts to a high powered air purifier.

So, when you’re printing in space, what do you print? In a lot of ways the first few planned prints aren’t that surprising; they will be simple geometric tests. After a new printer is set up on Earth, it’s pretty typical to run several prints to verify the resolution and calibration of your new device. NASA plans to do the same, with one additional goal in mind: the prints will be sent back to Earth to Made in Space so they can take them apart and confirm they printed as expected. This check is necessary, considering the ultimate goal is to be able to conveniently print replacement parts on the ISS. If something needs to be replaced in space, there’s very little room for error. 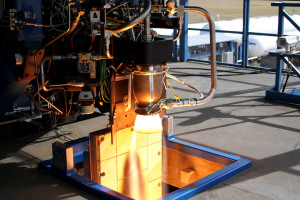 Considering the extremes of space, you can imagine the issues that could potentially be encountered with printed components. On January 6th Space X launched their first rocket utilizing a 3D printed valve. It turns out that this yields a more resilient part than other methods. It was also printed in two days, far less time than with typical casting. From Space X’s site:

“For almost 3 years, SpaceX has been evaluating the benefits of 3D printing and perfecting the techniques necessary to develop flight hardware. One of our first major successes was printing a SuperDraco Engine Chamber in late 2013. Today, SpaceX is testing the SuperDraco engines as part of its crewed spaceflight program and the Dragon Version 2 vehicle. In late 2013, SpaceX successfully fired a SuperDraco engine at full thrust using a 3D-printed engine chamber developed entirely in-house.” (-Space X)

As one of the major players in space travel, this is a good indicator that 3D printing in space is going to be essential for future missions. It looks like replacement parts may end up being made in house, in space.