Right now 3D printing is a hot technology. The mainstream public and governmental bodies are finally beginning to catch on to the fact that 3D printing is a revolutionary technology, even though it has been a quiet revolution until now. Kickstarter.com is constantly populated with new 3D printing technologies and more and more people are becoming familiar with what the technology is capable of.

2014 rang in the 30th anniversary of 3D printing technology. Invented by Charles Hull in 1984, this technology, known as stereolithography, used laser light to solidify a liquid substance layer by layer, creating almost any shape imaginable. 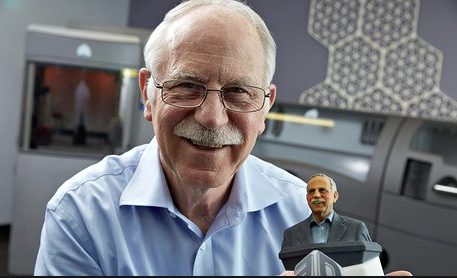 Stereolithography revolutionized prototyping and the design process, allowing for a much faster testing phase. This meant that designs could be tweaked and reworked multiple times before committing to an expensive manufacturing run.

3D Systems (founded by Hull in 1986) produced the first stereolithography machines in the late 80s. Even though the early machines were relatively primitive, they were leaps and bounds beyond the laborious and slow prototyping process of the day. Before the advent of stereolithography, models and prototypes would have to be made with labor intensive techniques such as injection molding or CNC machining, which often have significantly longer lead-times and were not always capable enough to make parts of the needed complexity or quality. Stereolithography certainly hasn’t replaced these methods, but for many design processes it is essential because of its speed and precision. The late 80s also saw the development of Selective Laser Sintering (SLS) and Fused Deposition Modeling (FDM). The medical, automotive and aerospace industries especially supported the development of the technology and naturally these were the first clients for this new method of design.

3D printing technology steadily developed through the 90s in parallel to the home computing revolution that would eventually make it possible for average people (not millionaires) to have access to 3D printing in their homes. During this time 3D printing technologies were also making headway in the medical industry, in the late 90s 3D printed scaffolding was used to produce the first engineered organ: a human bladder. Going forward medicine would find many more astounding applications for 3D printing, the first notable example being the production of miniature kidneys that were capable of filtering blood in animals. The concept of 3D printing organs and tissue is huge for the medical industry.

It wasn’t until several years ago that 3D printing began a serious push into the mainstream market and the homes of people all over the world. The main drive behind this development was a concept known as Open Source, which ensured that an idea remains free for others to replicate and share. This meant that some forms of 3D printing technologies could be distributed and modified for free.

The release of the RepRap Open Source 3D printer was the most visible product of this new development in 3D printing, a relatively inexpensive machine that almost anyone (with lots of patience!) could use, the idea being that manufacturing could become “democratized”. It could manufacture 50 percent of its own parts.

While this was getting traction Selective Laser Sintering became a viable method of creating 3D objects, due to its nature SLS allowed for the advent of “mass customized” manufacturing, which meant that products could still be mass-produced while having the flexibility of being on-demand and without having to make every unit identical.

By 2008 the Open Source home 3D printing industry had progressed to the point that there were now machines that could print copies of themselves, barring a few core electronic and metal components that still had to be bought. This further pushed the barrier of entry down for the hobbyist and home user.

Now the 3D printing community was really growing. Co-creation services were launched, which allowed more people to get their designs printed. At about the same time, Makerbot Industries started to sell open source DIY printer kits.

The late 2000s see even more medical breakthroughs stemming from 3D printing technology. Full custom prosthetics, which had previously been unaffordable now become a reality for many. Bioprinting also brought us the first printed blood vessel in 2009.

After 2010 the printed objects become much more “serious” in nature. The Urbee, an entire car, becomes a high profile project for the technology. In parallel to this, a team at the University of Southampton printed an entire unmanned electric aircraft for $5000. It was a rather good one by all accounts.

At present there are now printers emerging that can print materials such as metal by using Direct Metal Laser Sintering (as one example). There are even machines that can work with silver or gold. 3D printed prostheses now also include internal structures such as a complete jaws, parts of the skull and prosthetic eyes.

2013 has seen the announcement of the first full-color 3D printer (although there is some debate on whether it really is the first), bringing the possibility of a device that might print almost anything just a little bit closer. The British government has now also made a landmark decision to make the 3D printing of guns illegal. Most likely, this is only the start of the profound effect this technology will have on us.

Even though the history of 3D printing isn’t that long, it’s almost certain that this technology or something that builds on it will have a long future ahead of it.