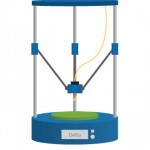 Delta printers are named after Delta Robots, a type of robot designed for really fast picking and placing operations, as used on factory lines. By varying the relative heights of each axis arm, the end-effector, which holds the print nozzle, can be moved anywhere within the printer volume.

The math involved to determine the path the arm should take is much more complicated than that used for a Cartesian printer. With a Cartesian printer you need three numbers for X,Y, and Z. Each of those coordinates corresponds to a specific print-head position within the rectangle. With a Delta printer, print head positions have to be estimated using trigonometry. Delta printers are faster than Cartesian machines and because of their design they can print relatively tall objects. Check out Altair, our Delta printer. 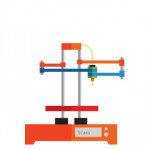 Selective Compliant Assembly Robot Arm or SCARA printers are yet another example of existing robot design being re-purposed for 3D printing. The easiest way to imagine a SCARA printer is to think of a person stirring a pot with a spoon using both arms, except the spoon is a nozzle.

SCARA printers are still pretty scarce, but they are much simpler to build than other types of FDM printers mentioned here. Longer arms also mean bigger objects are possible. Because the height of the nozzle varies depending on how far the arms are extended, this type of printer actually has to move the height of the printing platform during the production of a single layer to compensate. But, since the different heights at different extensions are constant, this is still simpler than the trigonometric calculations of a Delta-style printer. 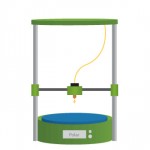 Polar 3D printers are the simplest printers compared to the other designs above. While most polar printers use 3 motors (one for each axis) the polar design can also work with just 2 motors. Whichever variant you consider, they all work by having two vertical rails upon which the horizontal rail holding the nozzle is mounted, giving X and Y axis capabilities. In order to give Z-axis ability, the entire build platform moves and rotates. This gives a very smooth extrusion, but currently leads to many compounded print errors, the rotational mathematics is also pretty complex and this technology is essentially experimental at the moment. Because the platform is moving it also makes it difficult to design heated build platforms, which are necessary for many 3D printing materials. 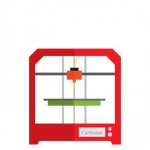 Cartesian-style printers consist of a rectangular frame wherein the nozzle can move along the X,Y and Z axes. These printers are the most common type of desktop printer. They work by having three axes of motion for the print-head that are at right angles to each other. The nozzle can move in any direction along one of these three axes within the bounds of the box.

Get Product and Sales Updates